A noticeable change in recent labor union history is a gradual departure from their original international ideas by increasingly narrowing them down to local or domestic matters. The old idea of international proletarianism, and the aspiration to defend workers’ interests worldwide, or at least beyond domestic boundaries, are giving way to union policies heavily conditioned by more immediate interests, often clashing with those defended by labor union organizations in other countries. From the grand labor union statements preaching the fight for workers’ rights in a context of international solidarity, and the organizational activities on the European and world stage, in an attempt to be present in the major global debates, we have moved towards framing the protection of interests preferably within the territory where each labor organization operates.

What lies behind this change? Obviously confusion, perplexity, and a failure to analyze and understand the new economic and social context associated with globalization and with the new labor relations. But that is not all: the way in which labor relations are evolving in an increasingly open and globalized world has turned the labor unions into increasingly more domestic organizations, whereas companies are tending to broaden their horizons. Companies are more international, the interplay of economic forces is increasingly more global, whereas the unions are finding it harder to push forward proposals and approaches that go beyond domestic boundaries.

In the current economic dynamics, in a great many company disputes the unions are finding it increasingly difficult to adopt the role of international player, and are being compelled to be restricted to defending local interests, which often come into conflict with the interests of workers and labor union organizations in other countries. In processes for industrial restructuring and shifting production, the only union weapon able to be used to exert any pressure is cross-border industrial action creating a coordinated pressure and negotiation front internationally. Only the concerted pressure of the various business units would make it possible to have representatives with a real ability to influence companies’ decisions. But this comes up against an impossible obstacle: the interests of the workers and of their unions, in the various countries are for the most part not the same. The shifting of production has an adverse effect on the country it leaves, but benefits the workers in the recipient country. The problem becomes more acute in a single market, where it is not even correct to talk about “shifting” to refer to the transfer of production to another country in the single market.

There have been recent examples of all this. Cases involving closures of business units, by multinational companies, with facilities in various European Union countries, in which the labor unions’ first goal was to seek the solidarity of the unions in those other countries, by asking them to take action to exert pressure for a reconsideration of its intentions by the company. And the response could not have been more disappointing: closure of the factory was going increase production and strengthen other factories, so their workers were not going to join any action that could adversely affect their interests.

And this situation is reproduced, with bolder hues, within the confines of groups of companies. A good example is the automotive industry, where a firm’s announcement of the manufacture of a new model or of the launch of a new product pits the factories in the various countries against each other on a race to see who will win the contract. Naturally this race is influenced, and heavily so, by the working conditions offered by the labor unions to secure production, and on many occasions, by the very survival of the plant. In these circumstances, it is unrealistic to propose common labor union positions and each labor union is compelled to strictly defend the interests of its own workers, in stark contrast to those of other countries’ workers. The union is therefore forced to “think” in domestic or regional terms whereas the company approaches and develops its strategies globally. This is what I mean when I say that the labor unions are increasingly more domestic and companies becoming are becoming more international. More global in other words.

This course of events in turn has considerably changed the dynamics of labor relations and the relationship of forces among their main players. From one angle, due to the characteristics of the new production system, the unions’ ability to exert pressure in a local context and in the short term has risen. Many companies cannot withstand a stoppage, not even a short one, in production. This is particularly the case at companies supplying others, which must operate on a just-in-time basis, and face fierce competition. In all these cases, the battles are usually won by the unions and that explains the demise of collective bargaining, and the appearance of collective labor agreements with a rising number of concessions. The terms of collective labor agreements often make us wonder how they were ever granted by companies. And the reply is simply this inability to withstand a stoppage in production. But whereas the battles are won by the unions, the wars are won by the companies. A labor union’s advantage in the short term becomes the company’s overriding power in the medium to long term. If the labor unions cannot properly administer their ability to exert pressure in the short term, they run the risk of triggering a scenario where the company, which is a global, rather than a local, player, must reorganize production and use processes for shifting production, or assign the workload to other business units. In Spain we have seen examples of union action which have gone, to paraphrase Groucho Marx, from victory to victory until the final defeat. We have seen how a brilliant string of victories in negotiations can lead to closure of the factory and to production being shifted to other countries.

The unions ought to seek a way to turn that tide and try to find a new role on the global  stage where the most important decisions are taken. Burying themselves in local causes is the surest route to insignificance and would condemn the unions to a strictly corporate role, confined to protecting the professional interests of certain core-groups of workers, at times no longer against employers but against other core-groups of workers, and a long way from the intermediary roles at the levels that really matter for decision-making and from having even the  slightest amount of influence on the organization of corporate relations (that political role, beyond strictly corporate matters, that the unions have already sought). 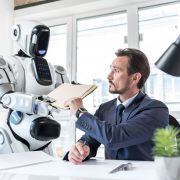 The future of work. Changes in the world of employment